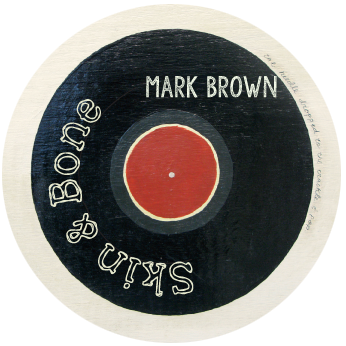 Mark Brown grew up in Maryland, where he was 6 years his first album of Johnny Cash was present. In 1975, a fellow blacksmith took him to a concert by Tom Waits and this was immediately initiated for Mark to make his first steps in music. Meanwhile, Mark, say 15 years musically active and worked in agriculture, as a mechanic, fisherman and carpenter in the Northeast of America. Both Cash and Waits have left a huge impression on Mark and this is evident in the 14 own ballads and country songs on this disc. Songs that were made both lyrically and musically artisan, and which should therefore be taken seriously. Seriously though, does not mean that there is no humor is present. Often humor which is hidden somewhere in a corner of the song cunning. The dark side of Waits and the relative calm of the older Cash Making ‘Skin And Bone’ a mysterious no ordinary album. The toolbox contains guitar, bass and drums, occasionally trombone, ukulele, fiddle, banjo and pedal steel, which is the special character of Brown’s compositions reinforced.

In the delightful ‘Smashed’ seems Browns voice intonation and even a bit like the “man in black”, while “Cried In Your Bed” emotional Waits exposes him.

It’s a mystery why Brown is not better known. Probably has something to do with it is not always present commercial character in his music, but the status of cult artist is definitely him like a glove. ‘Skin And Bone’ is certainly not a ‘skin and bones’ but a somewhat mysterious but expertly crafted album.

Who a ‘Cash meets Waits’ visible, will be with ‘Skin And Bone’ by Mark Brown, on a drizzly evening with a glass of wine, soon discover the sun behind the clouds.